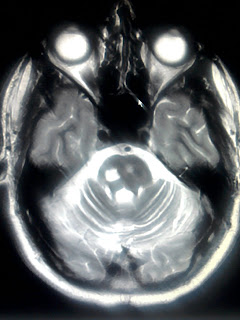 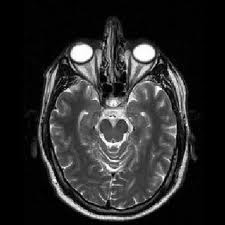 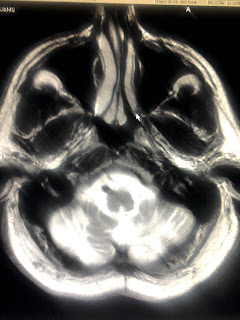 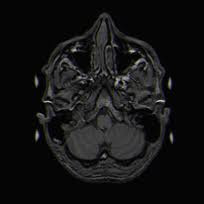 I have found some interesting pictures...I have a copy of the scans from after my surgery. The first picture will be of a healthy cerebellum; the second will be a picture of my cerebellum. The areas that are white show areas that have been removed. The third picture will be of a healthy brain stem; the fourth will be my brain stem. The larger and smaller white spots are areas that show the stroke in the stem. As I have said before, the neuro-surgeon told my family that, normally, when the brain swells to the point that the brain stem is compressed resulting in ONE brain stem stroke, you normally do not recover; however, when there are TWO strokes, and the bigger one is quite large, there was no hope given for any significant recovery.

Popular posts from this blog

It's been a long time...but here I am back in Stratford

January 11, 2022
It has been nearly 6 years since I have updated this blog; my apologies. For those that had been following for some time, since I last posted: I stepped down as Senior Pastor at New Covenant church in Knoxville, I moved to Ankeny, Iowa, started a new ministry with St. Croix hospice as Chaplain. I was chaplain with St. Croix for about 4 1/2 years, then in 2020 I moved back to Stratford to pastor First Baptist church. It was a big change going from chaplain work back to the pastorate.  I must confess, when I first came (back) to Stratford I was ready to pastor again! I love preaching; I love the ministry of being a pastor, and I love interacting with people long-term. (Being a chaplain is great, but you only interact with a family for a week or so, for some a little longer, but there was a constant upheaval of people and it was exhausting at times...) But, one thing that I have noticed since my stroke is that I get my feeling hurt easily. For instance, people leave the church all the tim
Post a Comment
Read more

January 28, 2022
Tomorrow I will preach the funeral for a dear friend of mine. He was the definition of a selfless person. I truly appreciated all that he did, but, when I was meeting with the family on Wednesday a memory came to me suddenly and I was suddenly overcome with emotion. Let me back up a little bit: After my stroke in December, 2008 my license was revoked for obvious reasons and it took me some time and practice before I was able to drive again. I finally got my license back in February, 2009. But, shortly after I got my license back the reality of the severity of my stroke became evident: my stroke had seriously impacted the PONS area of my brain stem, and therefore, a lot of my nerves were negatively impacted. One of the nerves that was damaged was the nerve that controls my eye movements; my left eye would would twitch, at times almost uncontrollably, and that made it really difficult to drive, particularly at night. That brings me to the memory that left me so emotional. Fast forwar
1 comment
Read more

What my stroke has taken from me...

strokesurvivor
I pastor First Baptist church in Stratford, Iowa. The church is affiliated with Converge Worldwide. I suffered a major cerebellar and brain stem stroke on December 8, 2008, but was back in the church office on January 7, 2009. When I am not pastoring, I love playing golf, lifting weights and walking.